World-renowned as a mecca for muck diving, the Lembeh Strait in North Sulawesi sits within an incredibly bio-diverse region of Indonesia, which boasts a multitude of bizarre, alien-like macro life. Year after year, the Strait entices scuba divers and underwater photographers to make the trek for workshops, shootouts, and bucket-list ticks. Whether in search of mating mandarinfish, flamboyant cuttlefish, or pygmy seahorses, muck diving is a big deal. And while scouring underwater rubbish may not seem exciting for everyone, the pastime brings in millions of tourism dollars annually to local communities throughout both the Philippines
and Indonesia.
Best known for its sandy volcanic slopes and fascinating underwater critters, the Lembeh Strait is a narrow body of water in the northern part of the country that divides the main island of Sulawesi from Lembeh. For scuba divers and underwater photographers that appreciate the smaller things in life, the Lembeh Strait is an absolute must visit. However, like many other ecosystems worldwide, it requires passionate ambassadors, such as Belgian researcher, Maarten De Brauwer just to help maintain the status quo.
In recent years, economists have increasingly developed and refined models, which look to integrate the financial value of “natural capital” including animal species such as the manta ray or whale shark. However, at a granular level, there has not been much focus on macro subjects such as the blue ringed octopus or hairy frogfish. This is where De Brauwer comes in. The young researcher has spent a great deal of time and energy assessing the economic benefits of muck diving while residing in Lembeh for his PhD  project. 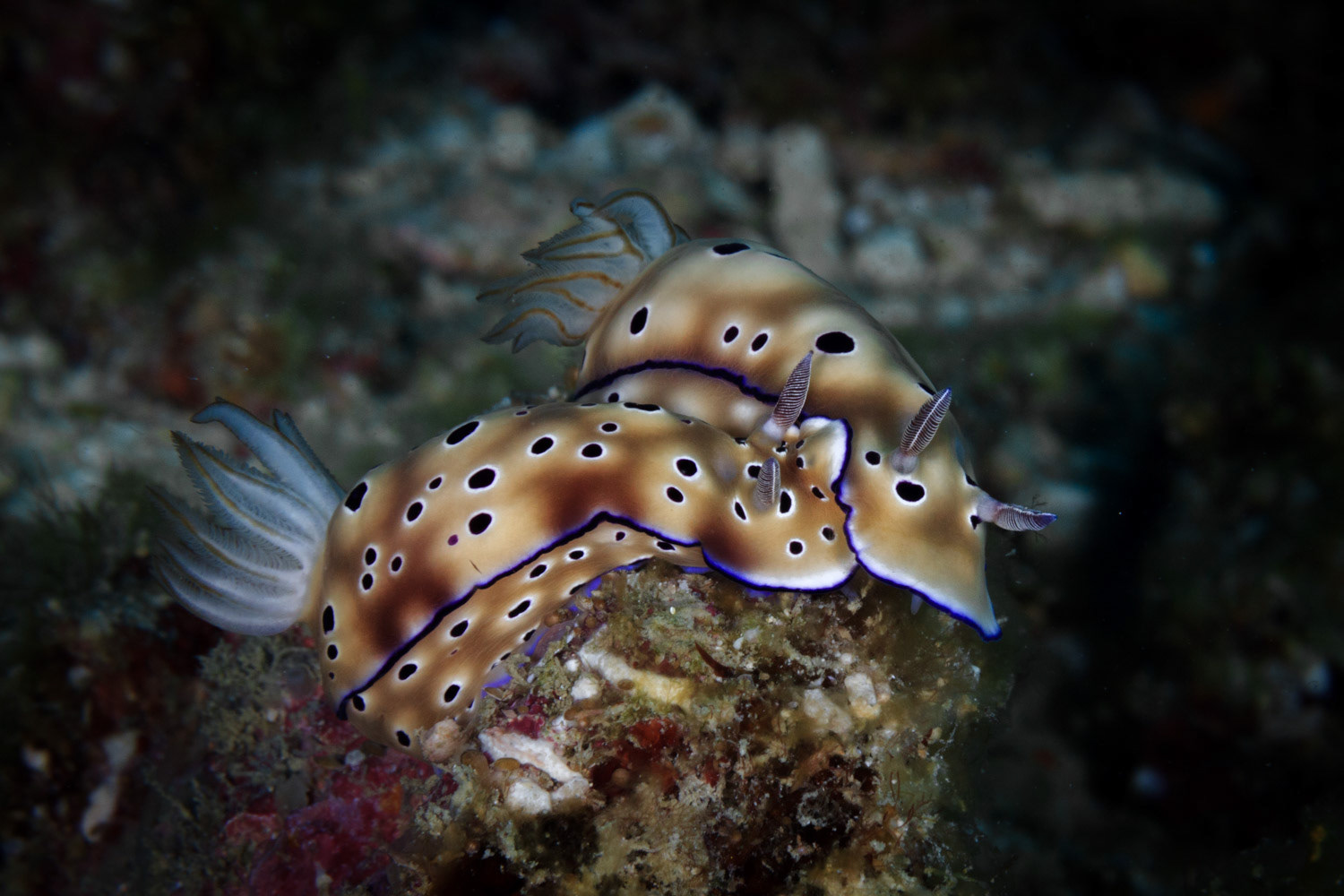 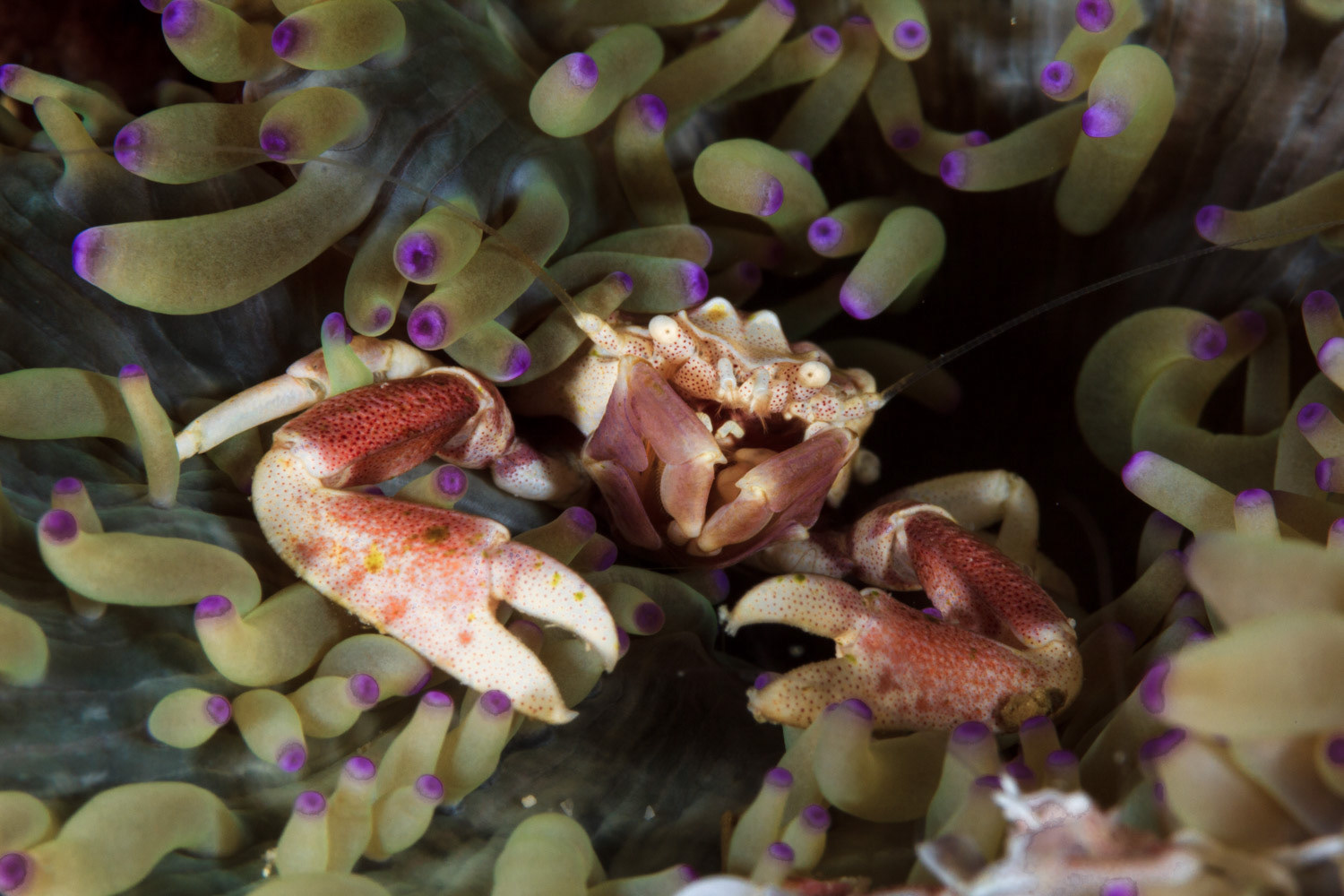 Over the course of a dive trip to the Lembeh Strait, I had the opportunity to meet up with De Brauwer, and to learn first-hand about his fascinating research. He explained that by placing an economic value on our natural resources (no matter how insignificant they may at first seem), we inherently protect both them as well as ourselves. De Brauwer provided a very compelling argument for this suggestion.
For example, his findings indicate that dive guides in the Philippines and Indonesia net US$51 million dollars annually from guiding muck divers. This figure represents nearly three times the local minimum wage. And while this may sound impressive, De Brauwer emphasizes the true number is likely much higher. While preparing the figures, De Brauwer only accounted for dive centres that specialised in muck diving. Of course, plenty of other more generalist dive centers and liveaboards across the region frequent muck sites as well.
In his paper, Known Unknowns: Conservation and Research Priorities for Soft Sediment Fauna that Supports a Valuable Scuba Diving Industry, De Brauwer presents the top ten muck diving species he derived from a method that is not yet commonly used in the conservation world. Popularized by both the Food & Beverage and Medical industries, the “Best-Worst Scaling Method” helps to identify the most popular muck diving species among divers.
Such data points could prove invaluable for dive organizations and NGOs, as it provides a baseline for research, marketing, and conservation efforts. So who is your average muck diver? De Brauwer explained the typical muck diver is someone with a good amount of dive experience that possesses an average of 580 logged dives. In his research, he also determined 73.5% of those divers are in fact underwater photographers donning expensive camera systems. Not surprisingly, muck divers are generally high-income earners with advanced level educations. But what are the Top 10 muck diving species these well to-do divers are after?
Well, by comparing the results from the Best-Worst Scaling Method to a traditional survey, De Brauwer was able to put together the following list: 1)    Mimic Octopus/Wunderpus 2)    Blue-ringed octopus 3)    Rhinopias 4)    Flamboyant Cuttlefish 5)    Frogfish 6)    Pygmy seahorse 7)    Other Octopus species (e.g.Mototi octopus) 8)    Rare crabs, such as boxer crabs 9)    Harlequin shrimp 10)    Nudibranchs
The mimic octopus, an apparent favorite among photographers, tops the list. De Brauwer credits this to the interesting behavior they display. While the top ten results are not at all surprising, the fact that little research has been conducted on them is quite disconcerting – particularly when one considers more widely known species missing from this list (such as the ghost pipefish) are less likely to attract divers and tourism dollars without the presence of some of these less mainstream “Top Ten” species. By calculating the actual benefits of muck diving and the particular species that repeatedly bring tourists to remote regions such as Lembeh, De Brauwer hopes to get a lasting conversation going with 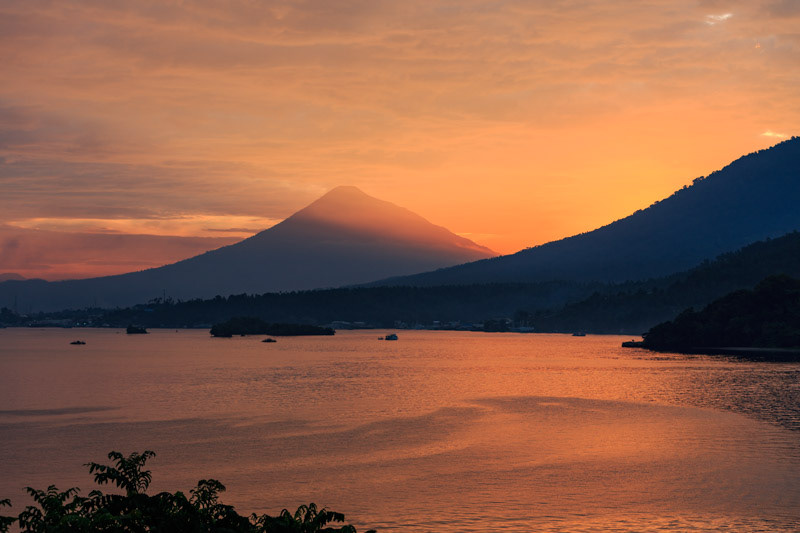 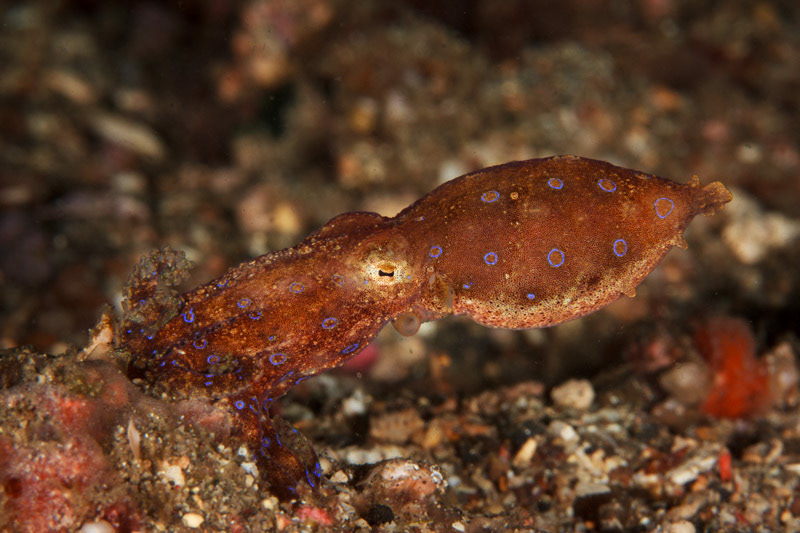 Local governments and stakeholders. Without empirical economic evidence, it would be difficult to properly convey the true economic value that their underwater “wastelands” hold. By conducting his research, he hopes they will come to grasp the true economic value that their underwater ecosystems provide for their communities and ultimately protect them. Without research like De Brauwer’s, and passionate divers and underwater image-makers, dredging and/or other destructive activities could potentially wipe out the array of remarkable species that populate the Strait before much is even known about them.
Of course, as evidenced by De Brauwer’s assessments, this would also adversely impact the livelihoods of so many locals as well as their broader economy. While marine life encounters provide relatively high-paying jobs for locals and great joy for divers, De Brauwer is concerned about the vulnerability of these highly sought-after species, especially when it comes to divers touching marine life — which is not acceptable. He took his concerns regarding the welfare of marine life a step further, with extensive research into the effects of camera strobes on fragile seahorses. While his conclusion was that the strobes were not harmful; he notes that there is always a risk to the wildlife in any marine life encounter. After chatting with De Brauwer, I headed out into the Strait to explore for myself.
Equipped with my 100 millimetre macro lens, I switched on my critter radar and got to work.
A great deal of satisfaction certainly comes from finding and creating images of these complex creatures. In a way, it is very much akin to a treasure hunt. Once a camouflaged, miniature subject is found in the sand, or perhaps in an old soda bottle, a great deal of patience is usually required to capture an interesting tack-sharp image. While I don’t necessarily have the greatest radar for critters, I managed to photograph a species that was high on my own list: the blue-ringed octopus. Although slightly bigger than what I had imagined, the encounter did not at all disappoint. In addition to the satisfaction that can be felt, it occurred to me that macro subjects are much more foreign to our terrestrial brethren, making them all the more important to create and share.
Documenting critters that don’t typically make it into the mainstream media can help raise awareness
and appreciation for these lesser-known creatures. Of course, I felt inclined to conduct a Best-Worst Scaling survey on Maarten to find out his most and least coveted species. Here’s what he had to say:
“One of my all-time favorite critters would be the flamboyant cuttlefish: the combination of cool behavior, switching from perfect camouflage to outrageous colors, and their tiny size never ceases to amaze me. While rhinopias are great critters, I feel that they offer less of the exciting behavior than some of the less gaudy colored species out there.”
FINAL THOUGHTS
As many famous muck sites, such as the Lembeh Strait, are located in remote, hard to reach areas, where locals have few choices for employment, muck diving provides a rewarding and sustainable alternative for those that may have otherwise been fishermen or factory workers. Clearly, great benefits can be derived from assigning an economic value to each of these critters. Society is fast approaching a tipping point where we are using more resources annually than the planet can replenish in a given year. It’s high time we value both big and small alike. Hopefully, with continued passion for places such as Lembeh, increasing research and reverence will continue to cultivate valuable tourism dollars providing balanced support for both conservationist’s concerns as well as more business-focused leaders.