​​​​​​​Wildlife photographers create a whale tail database to aid researchers in the Kingdom of Tonga. Markings on whale tails are essentially the equivalent of a human fingerprint.

As was the case with the majority of whale species, the nineteenth century was not kind to the humpback. Commercial whaling brought the species to the brink of extinction. In recent decades humpback populations have recovered again thanks largely to improved protections. With numbers bouncing back, researchers are keen to advance their understanding of the recovering species, particularly regarding migratory patterns and global population size.
Financially and logistically, ambitious data-driven projects such as these can be hard to get off the ground. Small research teams, while capable of interpreting significant and complex datasets, rarely have the means to collect such extensive data in the first place - not
at significant investment of both time and money, at least. To better understand the world’s humpbacks, collaboration would be key.

Several citizen science initiatives are gathering valuable humpback data from people and organisations in regular contact with the species, collating information researchers can access and interpret. Some of these citizen science programs cover whale sightings around the world, while others focus on specific locations.
One region-based initiative is the Tongan Fluke Collective (TFC), founded by wildlife photographer and expedition leader Scott Portelli. For the last 17 years, Portelli has been leading groups to Tonga for humpback encounters. During this time he has compiled a database of underwater and topside whale fluke (whale tail) images. Four years ago he invited additional photographers to the project and has had a lot of success garnering support.

Between the months of July and October large numbers of humpback whales make their annual migration from the frigid, dark waters of the Southern Ocean to the warm, clear lagoons surrounding the South Pacific islands to breed and raise their young. One particular stopover that attracts both whales and freedivers alike is the quiet Polynesian archipelago of Tonga. With Fiji to the north-west, Samoa to the north-east, and Vanuatu to the far west, the remote Kingdom of Tonga is nestled in an idyllic part of the planet.
Besides forty-ton humpbacks, others that make the journey to the Kingdom include scientists, divers, photographers and tour operators. The TFC relies on 50 semi-resident photographers leading groups and 38 tour operators that are out in the field every day for months at a time to help build its database. As the odds of seeing and documenting flukes are much greater for tour operators, the TFC regularly reaches out to these stakeholders for images. 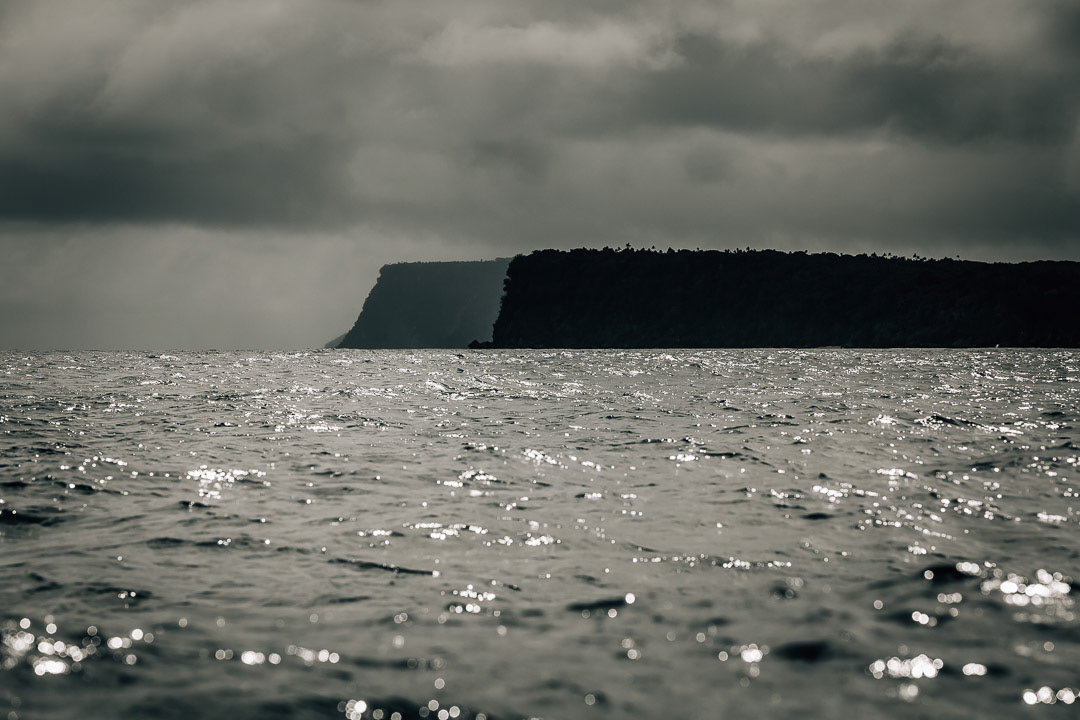 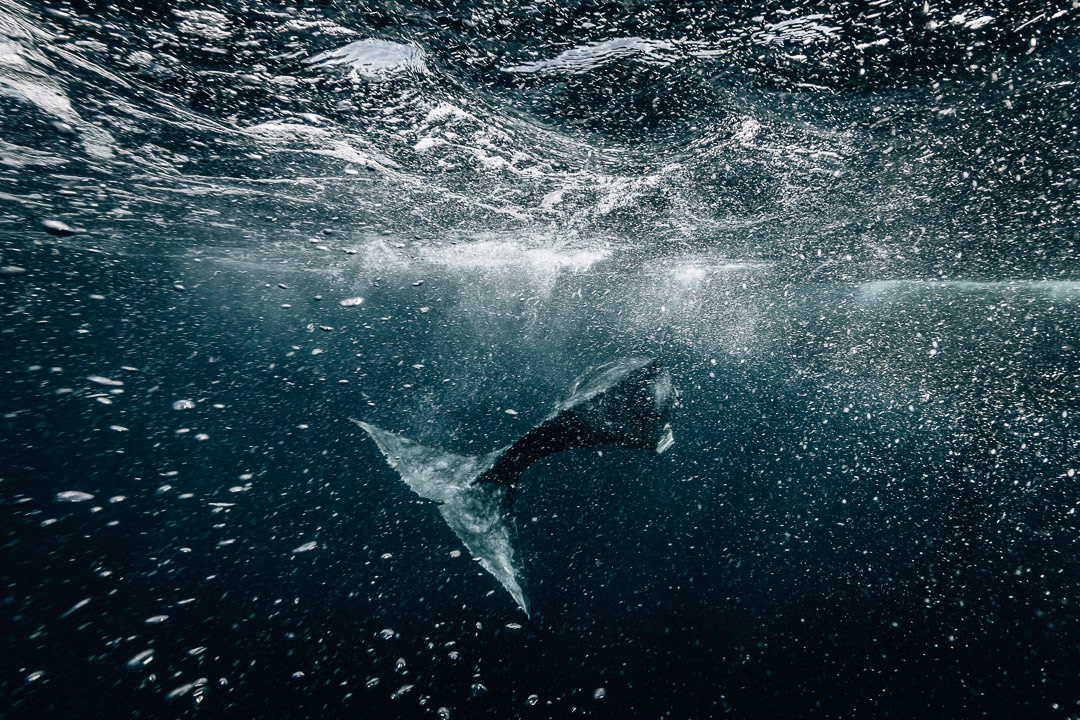 That’s not to say visiting photographers don’t contribute to the TFC. A dedicated Facebook group has been established to encourage participation in the Collective.However, critical metadata such as date, time, and GPS coordinates are often not provided with the images. The main purposes of the Facebook group are to raise awareness, provide regular updates and encourage a growing community of citizen scientists. The updates include information on where the whales are traveling, and sightings in other regions of Tonga, or even as far as Antarctica.
Documenting and collecting images of humpback whale flukes is extremely important in order to help identify individuals in a population. The fluke of an adult humpback whale consists of identifying features on two lobes that are separated by a notch. The unique features of each fluke are functionally analogous to the identifying characteristics of a human fingerprint, perfect for accurately recognising individuals.

The fluke may contain scars from predators or collisions with vessels, birthmarks and barnacles; but each fluke has three common identifying characteristics - the trailing edge, the fluke shape and the notch shape. Of these characteristics, the most helpful to researchers is the trailing edge, as it tends to remain constant throughout a humpback’s life. The tracking and geotagging of flukes therefore offers significant insight into the movements of individual humpbacks. The more comprehensive the data, the more compelling the picture.
According to Portelli, a number of organisations have operated in relative isolation for years - conducting private research and making assumptions about humpback migration patterns and habits with limited data. Portelli noticed that researchers would drop in for short periods (often for PhD projects) and form assumptions about the whales based on a small amount of information, no larger dataset for them to tap into. And, as findings were generally not shared with colleagues before the researchers departed, often never to return, a great deal of information was being lost.
Frustrated by the fact the majority of the organisations did not share their findings, Portelli set out to create a free, public database of fluke images from around the archipelago. By compiling images of humpbacks frequenting Tonga he hoped researchers would be able to get a more accurate gauge on the local population size, and a better understanding of its movements within the region.

The TFC’s primary purpose is to provide an ever-growing hub of whale fluke images in order to standardise data points for the combined benefit of researchers and organisations. Historically, such groups have not shared information - and currently many still do not reciprocate any of their own images to the database - Portelli is hopeful they will eventually begin to see the benefit in doing so.
Now, the TFC is helping to close the gap where traditional scientists and researchers faced limitations. Rather than leveraging just a small portion of data from one source for specific research in connection with a formal paper or funded assignment, science can now benefit from big data from multiple sources - unprecedented for projects in a specific region over a short period. To achieve these ends, the Collective maintains a database full of fluke information for researchers to access free of charge.
Whether underwater or from a boat, the Collective encourages visitors to Tonga to contribute images of adult humpback flukes. While collecting fluke images may seem straightforward, it is not an easy task. Long lenses, accurate timing and patience are required to get a sharp image from a moving boat. Underwater, things can change quickly, and divers typically try to avoid positioning themselves near the rear of a humpback - colliding with the tail of an adult whale could result in death.
Several organisations are already tapping into the collection. Some even provide feedback. However, to Portelli’s dismay, other organisations utilise the Collective’s database for research projects without contributing any of their own data. While the lack of reciprocity and finding new contributors can be challenging, he is not discouraged.

For every fluke image the TFC can use, credit is given to the appropriate photographer and tour operator Swimming with Gentle Giants donates AUD$1 to the local community. Each season they end up donating approximately AUD$1,000 to the Tongan community and local initiatives, particularly on the island of Vava’u where Portelli and many of the operators are based.
Currently, several organisations are matching the donation, including the Vava’u Environmental Protection Association and Phil Smith of Whales in the Wild. The Collective also engages with other non-profit environmental groups on the neighbouring islands of Haapai, Eua, and Tongatapu for image acquisition. One of the organisations that reciprocate images to the Collective is Happy Whale, based out of Santa Cruz, California. Founded by Ted Cheeseman in 2015, Happy Whale operates similarly to the Tongan Fluke Collective, but on a global scale. To date the organisation has created a database of roughly 125,000 whale fluke images from around the world.

Cheeseman and Portelli connected through the South Pacific Whale Research Consortium a couple of years back. Cheeseman, who is working on a PhD about humpbacks, has encountered possessiveness from some research organisations, but attributes that to a lack of funding. Not surprisingly, the two fluke collectives are supportive of each other and share data regularly.
The goals of Cheeseman’s PhD research project are to understand the differential survivorship rates across different humpback populations and to improve upon the quality of image recognition. Sorting through whale fluke images takes time and can be messy. It’s a process Cheeseman is working hard to streamline.
With research continuing to show a positive trend in the eastern Australian humpback populations, many are hopeful for their continued recovery. Curious calves that spend the first months of their lives nursing and frolicking alongside their mothers, vying for the attention of divers, while she is frequently distracted by pods of males competing for her affection in intense heat runs, eventually make their way to the Southern Ocean for the very first time. Where the pair goes after that is what organisations such as Portelli’s and Cheeseman’s strive to help researchers understand.
Citizen science initiatives are changing the way information is obtained and distributed. The TFC hopes to consolidate its dataset into GPS points on a map and present that data to the Tongan government to provide a bigger picture of humpback whale populations and movements around the Kingdom. Whether or not this will have a material effect on relevant sovereign decision- making remains unclear, but what is certain is that informed decisions can only derive from meaningful, substantial data.
Each year, participation in citizen science initiatives continues to grow, with a few million people now volunteering on research projects. The ongoing collection and analysis of data by members of the general public has the power to change the landscape of scientific research. While efforts such as the Tongan Fluke Collective and Happy Whale remain relatively young - with limited empirical results to boast of at this stage - their promise is real, and their mission necessary.
- J.L.
↑Back to Top